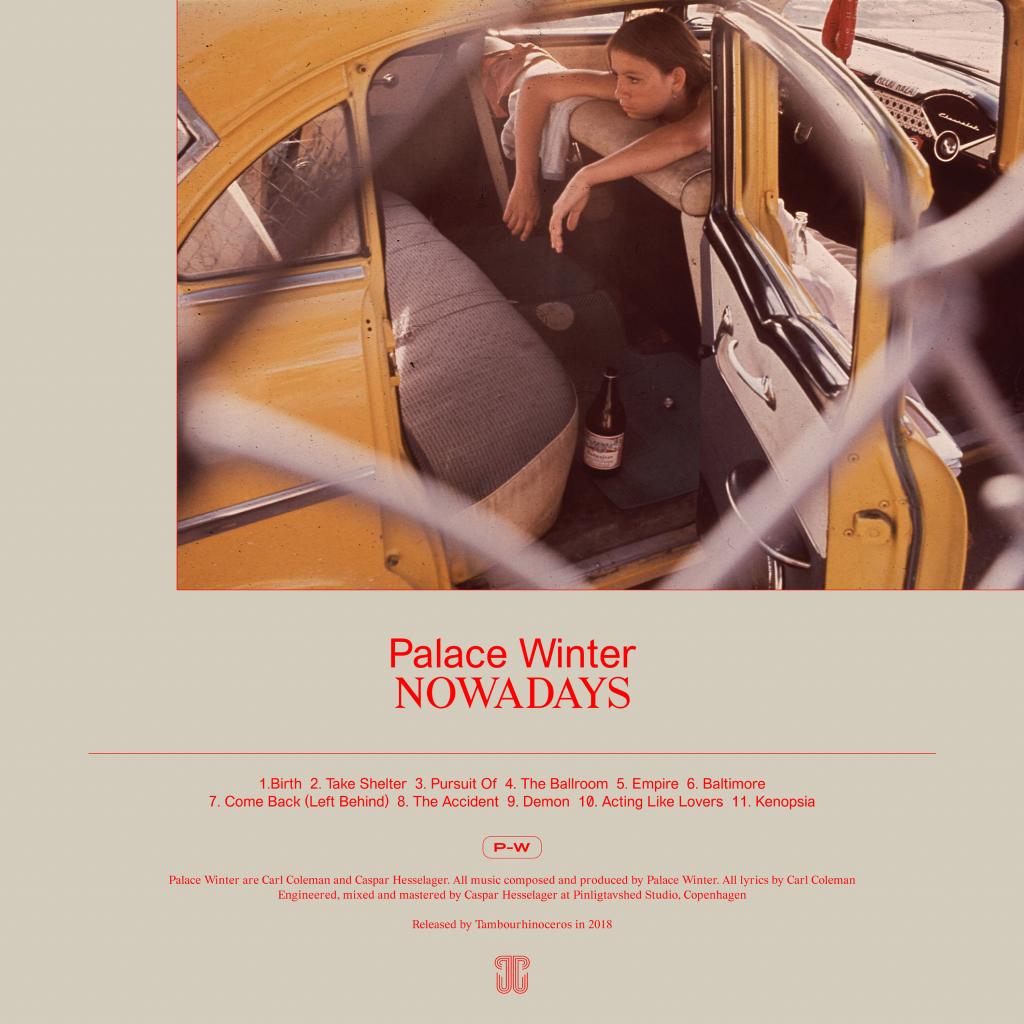 Arriving in adulthood is a bitter-sweet experience. Abandoned childhood fascinations make way for tough life lessons. But also the hope and potential that comes with taking charge – of both your life and other’s.

These are the central themes in Nowadays, the second full-length album from Palace Winter. Copenhagen based Australian singer-songwriter Carl Coleman and Danish producer and classically trained pianist Caspar Hesselager have built on their dynamic relationship to create an album that swells between tender ballads and high-energy melodies.

Built around floating keys, rhythm guitar and an insisting beat, they forge a bright and gloomy album that further develops the group’s unique sound, which has so far won them international plaudits from BBC 6 Music, NME and The Guardian, as well as Gaffa in Denmark, where they are based.

It opens with “Birth”, a mellow track whose minor key synths invite you into the duo’s atmospheric and melancholic universe. This is reinforced by the following number “Take Shelter”, a choral death ballad about confronting grief and coping with loss.

Fans of Palace Winter’s energetic live shows won’t be disappointed by the “The Ballroom”, the tale of a narcissistic and evil rock singer. Its vigour is reminiscent of the ecstatic “Positron” from their 2016 album Waiting for the World to Turn – songs that need to be played driving into the sunset with the windows rolled down as the world behind you burns.

Their 80s influence shines through on “Empire”, and “Come Back (Left Behind)”, whose bright notes contrast with lyrics that dwell on the challenges of anxiety, and coming to terms with the loss of a lover and feeling like you’ll never escape the fog of grief.

The album continues its exploration of deeply human themes in “Baltimore” (the experience of a suffocating love), “The Accident” (the realisation that life isn’t as bad as it seems), “Demon” (overcoming self-doubt and fear) and “Acting Like Lovers” (how sharing a traumatic experience can bring people closer).

Coleman lifts the distortion on his vocals for the final track “Kenopsia”, an eerie duet with Hesselager’s keys. It’s echoey reverberations appear to bounce within an enormous space that the two can’t fill – it’s full of soul and spectral emptiness.

Nowadays mulls over the challenges we face just trying to be alive in the present moment in a world full of distraction. You can’t swipe your way to happiness – you have to lift your eyes first.