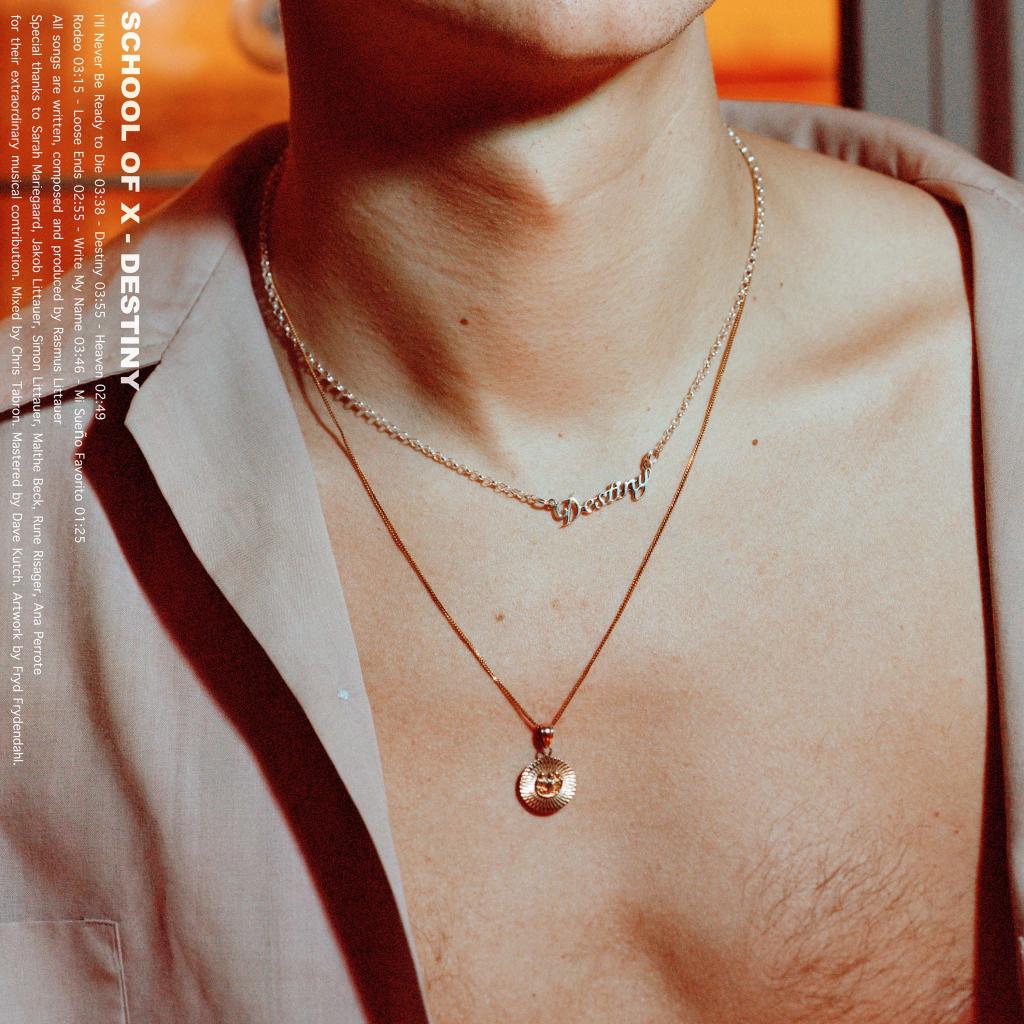 School of X borrows his moniker from Eksskole - Copenhagen’s anti-establishment art school from the 1960s. A Danish collective of experimental artists, the group featured Andy Warhol collaborator Jørgen Leth, the art historian Troels Andersen, and artists Poul Gernes, and Per Kirkeby. “It was about learning from each other and being progressive,” explains School of X, aka. Danish producer, singer and multi-instrumentalist Rasmus Littauer. “There were no labels - anyone could join. That philosophy is so cool and I really admire all those artists.”

Based in Copenhagen, School of X has forged his own collective with a similar ethos. He has a studio in the district of Nørrebro with friend and fellow producer Vera, and runs in the same circles as Yangze, Vasco, and Liss. It’s a supportive atmosphere rich with collaboration, and after years of touring the world as a live drummer, the multi-talented artist is striking out with that spirit in mind.

Though a solo EP by name, Destiny remains a collaborative effort by nature. School of X’s musician brothers Jakob and Simon Littauer both contributed to the record as a whole, and Copenhagen-based guitarist Rune Risager lends a yearning guitar solo to the lovestruck waltz ‘Heaven’. Elsewhere, Ana Perrote appears as the sole voice on closing track 'Mi Sueño Favorito'. Her understated spoken-word sample provides, in Littauer’s words, “the answer to the confusion and heartbreak in all of the other songs.”

Self-produced by School of X and mixed by Chris Tabron (The Strokes, Kelela, Beyoncé) ‘Destiny’ is assembled from hundreds of musical vignettes, recorded over the course of a year and a half of touring. Littauer brought his “small ideas” back to Copenhagen, and the tension between familiar surroundings and the unpredictable nature of the road went on to shape the whole record. “There’s a synergy between the life I have in Copenhagen and the life I have abroad,” he explains. “You feel like you’re growing, and you feel like you’re opening your mind to other people, and then when I come home I'm able to collect that and wrap my brain around it.“

“I think when you get older you realise that it isn't about getting fucked every night,” admits the 29-year-old. “I live alone with my thoughts a little bit more than I used to. I think I probably used to flush it away.”

Following his Faded Dream EP, released in 2017, Destiny is grandly textured, yet closely confiding. Singing of longing to rewind back to previous bliss or unobtainable infatuation, School of X continually explores the choices we make in determining our own paths. “It’s not about a kind of destiny which is premeditated,” he expands. “It’s scary that you're so much in control of what you do, when you let loose, how easy it is to shape your life, and decisions, and how big a cost it can have.”

“I like things that are really honest and really direct,” Littauer concludes, summing up his chief goal, and the very reason School of X exists. “Overexposed. It has to have the nerve, and the intimate part of the sound is really important to me. With “Destiny”, I really wanted to cut it into the bone.”